Homepage » Blog » ”Forward, lads, you are with me!”
Saturday, August 22nd, 2015, posted by Bogdan Condurăţeanu

With these words the ensign Ecaterina Teodoroiu had thrust into eternity on the 22nd of August 1917 on the hills between Muncelu and Varniţa.

Somehow, coming from the mouth of a girl-woman leading them into battle, the words made the soldiers feel safe and in high spirits: the Germans surely did not have an Ecaterina Teodoroiu of their own, so they were doomed from the start. Ecaterina’s hand had led many German across the Styx to their Walhalla … so all would be well since in front of them there was not a woman of flesh and bone, but a fighting Goddess with fire in her eyes and bronze weapons, summoned from the old ages to help her greatly beleaguered people in their hour of need… 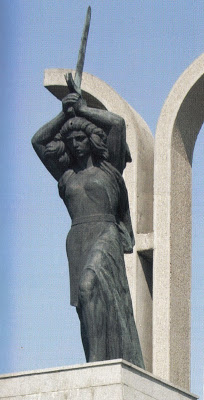 (sursa foto No Passing Through Here! (3))

An image of what that warrior Goddess must have looked like you will see if you stop a moment at Tişiţa. Guarding the northwestern corner of the intersection, it continues to impress the bystanders as it has done ever since 1931. Now, there is a neat European road linking to Northern Moldavia. Back then in 1917, it was a place no enemy would get through!