Old and new in a modern technological vision, in the newest issue of the Digital Atlas of 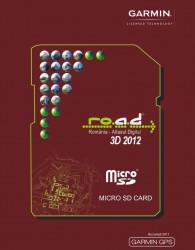 After an almost 3 year long effort, the team Sheba Distribution SRL, the Garmin distributor in Romania (www.rqa.ro) and the coordinator of the Digital Romania Project (www.romaniadigitala.ro) ) has the great honor to announce the availability of the new Digital Atlas of Romania RO.A.D.2012.10.

With over 1200 towns and settlements from Romania at street number detail level, covering the territory from the Danube Delta to the tip of the Carpathian Mountains, the Digital Atlas of Romania incorporates the latest technological advances available for state of the art Garmin navigation devices

3D Technology allowed – through historical and archaeological based studies – the reconstitution of UNESCO monuments from Romania’s past, like the Dacian Fortresses from the Orastie Mountains: Costesti, Blidaru, Piatra Rosie and the sacred precinct from Sarmizegetusa Regia. Also the exceptional realizations of the roman conquerors have not been ignored, in the Atlas one being able to view the magnificent building of the Aedes Augustaliae and the Roman Amphitheater from (Ulpia Traiana) Sarmizegetusa, together with the roman castra of Drobeta, Buciumi and Bologa. Careful attention has been paid to the reconstitution of the Apolodor from Damascus’ Bridge from Drobeta, which once linked the castra from Pontes (Bulgaria) and Drobeta and on which crossed over to Dacia the roman legions in the second dacian war (105-106 e.n.).

3D Reconstitutions are only the most spectacular part of an effort to create the first topographic repertoire of all fortifications in Romania, from all times: Neolithic, Bronze Age, Iron Age, the Latene period and the Roman-Byzantine ruling, the Migrations Age, Feudalism and Modern Age. Hundreds of fortifications have been identified and placed on the map. For some of these the historical plans have been georeferenced and brought to scale so that people with a keen interest can reach – guided by Garmin GPSs on dirt roads and trails – the places where the history of this country has been written.

From the Medieval Age have also been modeled UNESCO monuments like the churches from Voronet, Moldovita, Sucevita, Putna and Arbore. Romania’s great medieval tourist attractions are also present: the fortified evangelic churches from Viscri and Valea Viilor, Bran Castle and Hunyad Castle

From Romania’s Modern Patrimony, there have been modeled outstanding and valuable monuments like Palatul Peles and Pelisor from Sinaia, Culture palace from Iasi and the Palaces Elisabeta, Ghica and Cantacuzino from Bucharest. More than 50 public buildings in Bucharest alone, which are historical monuments, have been modeled with great attention to detail like: National bank of Romania Palaces, CEC Palace, Orthodox Church Patriarchy Palace, the National Museum of History, Palatul Scoalelor, the Justice Palace, the former Postal palace, the Mayory of Bucharest and many, many more. An emblematic contemporary building the the Parliament Palace could not have missed. In general modern and contemporary buildings of architectural value have been modeled, like: Palatul Telefoanelor, the Romanian Athenaeum, the Universitary Central Library, the National Art Museum of Romania, the Romanian Opera, etc., together with industrial monuments: Carol I Railway Bridge (known also as the Saligny Bridge) from Cernavoda and the Arc Road Bridge from Agigea.

Compared to other implementations present in the market, the 3D models from the Digital Atlas of Romania are elaborated with great care and attention to detail, contributing to the esthetical experience of the journey and its preparation, not just its visual/orientative part..

An ample lane guidance program has been started to be implemented in Bucharest. Drivers will be alerted on time as to which lane to engage for certain maneuvers. Alongside all highways special vocal explanations and lane guidance have already been implemented so that drivers will be told on time and with accuracy which course of action to take. The road network coverage greatly expanded in the counties of Giurgiu, Tulcea, Constanta, Braila, Brasov, Mures, Bistrita-Nasaud, Mures si Sibiu.

Over a hundred new roundabouts have been implemented in the map. Compared to maps coming from prestige companies from abroad (CNE2012.30 with data from Navteq), the Digital Atlas of Romania brings extra updated coverage without equal:
– the Sibiu ring;
– the Timisoara-Arad highway (opens on the 15th December 2011);
– the A2 highway from Murfatlar to Lazu together with the connection to and the A4 highway portion until the DN3;
– the complete A3 highway, including the Turda – Campia Turzii portion and the Turda node;
– the Adunatii Copaceni bypass on DN5;
– the Valcele-Apahida bypass (Cluj area);
– the NE of the Timisoara ring (between DN6 and DN69);
– the north Bucharest expanded ring including the Otopeni bridge;
– service exists alongside A2 highway between Bucharest and Cernavoda;
– the complete Basarab Passage, the 1 Mai-Marinescu and Matei Basarab breakthroughs;
– the new routing scheme from Razoare (!) implemented only days ago.

Besides these many more access solutions to enter/exit hyper malls have been implemented, the newes one being Colosseum in Bucharest. Over 30 large towns have 3D extruded blocks of flats for a navigational experience without compromise or equal.

The map size increased from 395 MB to 470 MB and benefits from a new cryptographic technology that requires the upgrade of the firmware on the units. RO.A.D.2012.10 is available – at the date of this announcement – only for the following families of Garmin GPS devices:

With the occasion of the launch of the new RO.A.D, we re-launch the site of the Digital Romania Project www.romaniadigitala.ro. Realized by the creators of the 3D models of the map, Symmetric Studios SRL (Hunedoara, Timisoara, www.symmetricstudios.com), the site enjoys a modern and attractive look and a heightened level of interactivity.

The map upgrades will follow from now on every quarter, the next issue of the Atlas, RO.A.D.2012.20 being scheduled for the18th februarie 2012.

RO.A.D. is a registered trademark of Sheba Distribution SRL.